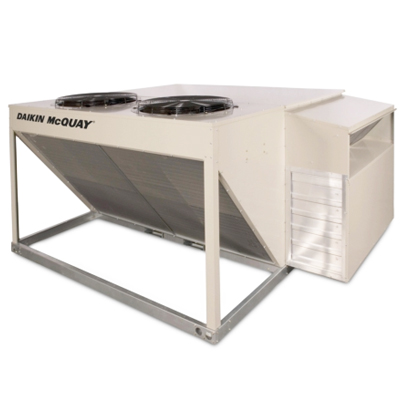 Commercial building owners take note – it is now possible to save a staggering 60 to 70 percent on HVAC energy costs over traditional rooftop units. HVAC manufacturer, Daikin McQuay, has become the first and only company to meet the Department of Energy’s (DOE) Rooftop Unit (RTU) Challenge with its Rebel™ commercial rooftop system.

According to the DOE challenge, participating HVAC manufacturers need to satisfy a DOE-issued specification for energy savings and performance. This includes meeting an integrated energy efficiency rating (IEER) of 18 or higher with a 50 to 60 percent reduction in energy use over current standards. The DOE and independent testing organization Intertek, conducted the performance testing for the challenge. The testing confirmed manufacturer claims that the Rebel commercial rooftop system exceeds the DOE’s energy savings and performance specifications with part-load efficiencies of up to 20.6 IEER and energy savings of up to 60 to 70 percent. As a result, the Rebel system offers the lowest total cost of ownership with complete system payback in as little as two years.

As stated by the DOE, the performance and energy savings is important because commercial buildings account for 18 percent of U.S. energy use and could save businesses over $1 billion dollars each year in energy costs if all 10 to 20 ton RTUs met the specifications of the challenge, helping American companies be better able to compete on a global scale.

“If there were ever a time to reevaluate a building’s commercial rooftop unit, it’s now,” said Don Winter, vice president of marketing at Daikin McQuay. “Early applications are showing that Rebel is performing even better in the field than in the lab.”

Winter went on to state that comprehensive details on the testing are available through Daikin McQuay for commercial building owners and management teams interested in calculating payback or conducting an energy analysis for their specific buildings.

Daikin McQuay, as part of its parent company Daikin Industries, is the world’s largest heating, ventilation, air-condition and refrigeration company in the world. Rebel is now available in unit sizes ranging from 3 to 12 tons. The wide range of features and benefits of Rebel make the energy efficient unit ideal for any low-rise application like schools, retail, offices, or medical buildings.