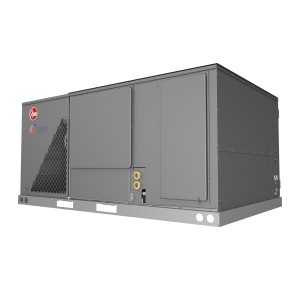 The new Rheem H2AC™ Rooftop Unit featuring eSync™ Integration Technology can save a restaurant up to 50 percent on its monthly water heating expenses CHICAGO, January 23, 2012— In conjunction with the AHR Expo 2012, Rheem today launched a first-of-its-kind integrated air and water system, which has the power to dramatically reduce utility costs for full-service restaurants. The Rheem H2AC™ Rooftop Unit featuring eSync™ Integration Technology unites a restaurant’s HVAC and water heating systems to achieve significant efficiencies. It works by using the heat removed from the restaurant by the HVAC system—which would normally be rejected into the atmosphere—as an efficient source for heating water. Restaurants use five times more energy per square foot than other commercial buildings and five times more energy in the kitchen than in the rest of the building (source: National Restaurant Association). When a restaurant has a demand for air conditioning and hot water, this integrated solution switches over from a refrigerant-to-air system, to a refrigerant-to•water system. This is an energy efficient option because the heat of the refrigerant is transferred to the water instead of rejected outside as in a normal air conditioning cycle. “Considering that today’s full-service restaurants are struggling with rising energy costs, there’s a strong, immediate opportunity for a system like the Rheem H2AC Rooftop Unit to make a real impact on an owner or franchisor’s bottom line,” said Chris Peel, senior vice president and COO, Rheem. “We estimate that this system can provide full-service restaurants with up to 50 percent savings on their monthly water heating expenses. At that rate, we expect most restaurants that implement the system will have a payback in less than two years.” Western Sizzlin Sees Tremendous Savings After Using the Rheem H2AC Rooftop Unit.

Rheem partnered with Arkansas-based Western Sizzlin Franchisors Gary Stovall and Wyatt Kaundart to pilot the H2AC system. Faced with rising energy costs and aging HVAC equipment, the franchisors needed a viable way to reduce their monthly utility bills. However, the busy, all-day buffet format of the restaurant made it hard to put a manageable energy-savings plan in action. “Before we began working with Rheem to install the H2AC Packaged Rooftop Unit, I never would have imagined that we could use our A/C system to, essentially, generate free hot water,” said Stovall. “Once we heard about the system, we knew that it had the power to reduce our energy costs, so we were eager to try it out. We needed to replace some aging rooftop units anyway, so timing was perfect.” Rheem replaced a rooftop air conditioning unit with a 10-ton H2AC Rooftop Unit featuring eSync Integration Technology. Rheem also installed a second new 10-ton rooftop air conditioning unit, which replaced an older model that served a portion of the restaurant’s dining room. In addition, Rheem overhauled Western Sizzlin’s water heating system and installed four Rheem Prestige™ Series Condensing Tankless Water Heaters—which operate at 94 percent thermal efficiency—and one 120-gallon water storage tank. Using Rheem’s exclusive eSync Integration Technology, the H2AC Rooftop Unit is able to pre-heat Western Sizzlin’s cold water supply to as much as 125 degrees Fahrenheit—which substantially reduces water heating costs. In the first six months after Rheem installed the integrated air and water system, Western Sizzlin saved, on average, $396 per month on its gas utility bill. In addition, Western Sizzlin has also saved $558 per month on its electric utility bill, thanks to upgrading to the two new HVAC rooftop units. The restaurant expects to hit the payback point on its new system in just 1.3 years. “Rheem made it possible to integrate our air and water systems, and that has helped our Western Sizzlin location operate more efficiently, conserve energy and, in turn, save on our monthly utility bills,” said Stovall. “Given the amount of food that we prepare and customers that we serve every day, having such an efficient way to heat water has significantly impacted our operations. In six months, we’ve saved more than $2,300 on our gas utility bills and nearly $3,350 on our electric bills.”